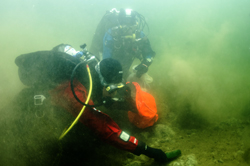 Hundred's of diver travelled to Windermere to join in a mass clean of it's beautiful Lake. Organised by TV presenter and BSAC member and volunteers from Kendal and Lakes Sub Aqua Club, the event was a huge success and saw 262 recorded divers in the water at the same time, in six locations around the lake, and 150 on a second dive. With low visibility at times due to the silty bottom being stirred up as they collected their booty, they still managed to bring up a staggering 7tons of rubbish, with articles ranging from Plastic bags and bottles through to a boats out-board motor and even a fully working toilet complete with cistern and ballcock, 73 tyres and at least four car batteries to name a just a few things.
Some of the rubbish is to be used by school children for a project to make art sculptures, which will then be auctioned off for ocean-based issue charities.
I was delighted that some of my images,(the ones with people in only) have been used document the event in some of the local media'